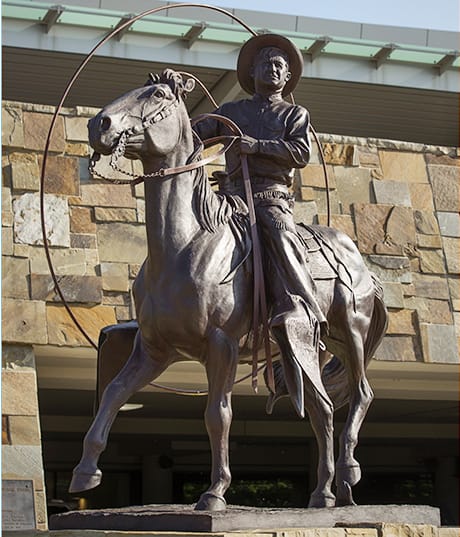 Oklahoma's Native Son was commissioned by the Oklahoma City Airport Trust to celebrate the completion of the Will Rogers World Airport terminal renovation project and to provide a spectacular focal point for the airport's garden plaza. Located between the arrival/baggage level of the terminal and the ground transportation plaza, Oklahoma's Native Son depicts Will, atop his horse Teddy, appearing in one of the Wild West shows so popular in his youth. He is performing one of the rope tricks that proved to be his ticket to the world's stage.

Harold T. Holden, or "H" as many call him, is an acclaimed western artist whose works appear in locations nationally such as the Oklahoma State Capitol, at the Keystone Resort in Colorado and the National Cowboy Hall of Fame and Western Heritage Museum, to name a few. Born in Enid, OK, and now residing in Kremlin, OK, Holden is a graduate of the Texas Academy of Art in Houston. He has been honored with numerous awards for his work and maintains a gallery in Enid, OK, "which is open by appointment or by chance." A more detailed biography of Holden can be found at HHolden.com.