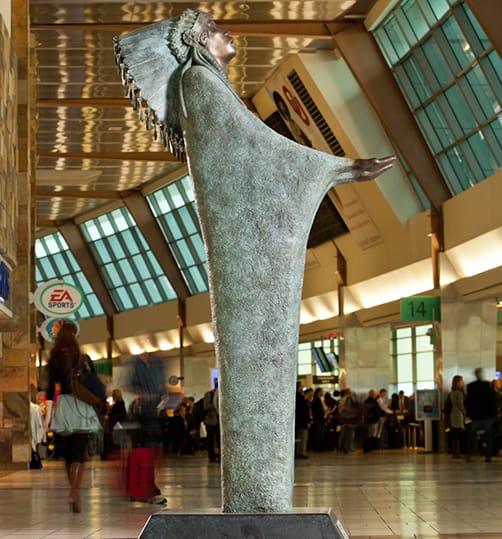 Acquired for permanent collection by the Oklahoma City Airport Trust.

Prayer is displayed in the central concourse near the Coffee Bean & Tea Leaf.  The sculpture was purchased from Allan Houser, Inc. of Santa Fe, New Mexico, the family company which represents the artist’s estate.

Born Allan Capron Haozous on a family farm near Lawton, Oklahoma on June 30, 1914, he was the first Chiricahua Apache in his family born out of captivity. He would become known to the world as Allan Houser. A prolific artist, he produced more than 500 paintings and thousands of drawings and sketches.  He also produced more than a 1,000 sculptures in stone, wood and bronze, examples of which are in museums and private collections throughout the world.

During his career, Allan Houser was recognized as one of the most important artists of the 20th century achieving acclaim throughout North America and Europe.  As an Apache, Houser was immersed in the history and community of the Indian people, and was dedicated to portraying people with respect and dignity.